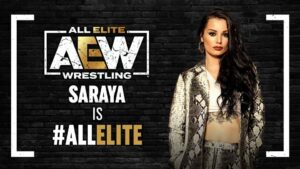 It’s been a crazy month in AEW to say the very least, but tonight they delivered a big moment that should help boost things back in a positive direction. Saraya (formerly known as Paige) made her surprise debut following the four-way match for the Interim AEW Women’s Championship.

Saraya joining AEW may be a bit bittersweet since WWE just released her over the summer after being retained by the company for years even though she had been off TV. Of course, she just missed Triple H taking over, which could have led to the door opening again for Paige to get cleared and wrestle again under the new regime.

But here we are and Saraya is officially All Elite. Her debut blew the roof off of Arthur Ashe Stadium and it’s clear that she is immediately the biggest female star in the company. Saraya is also the best in-ring female performer in the company, so she has a big challenge as far as carrying the division and getting the other women to hang on her level.

Saraya didn’t speak just yet, but they’ll definitely be milking her appearances and eventual announcement of her in-ring return. This is definitely a boost to AEW’s struggling women’s division, so here’s to hoping Saraya is completely healthy and stays that way since her last in-ring run definitely ended far too soon.

.@Saraya is HERE at #AEWDynamite Grand Slam and we are LIVE on @TBSNetwork! pic.twitter.com/bBqrfVUvS6