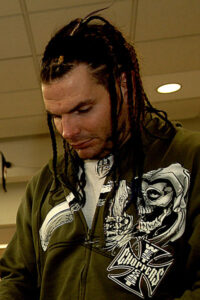 After viewing RAW this week, and for the last few weeks, I’ve really taken note of Jeff Hardy, and the explosive reactions he’s getting, which seem to be growing by the week. Hardy had a big push in his title feud with Orton, but WWE did not pull the trigger on a Hardy title run.

Now a few years ago, Hardy had a ladder match with The Undertaker which was considered a classic bout, and a lot of people were thinking it was main event time for Hardy then. To me, he was still just a tag team guy, although he pulled off some spectacular singles matches, something wasn’t there as a WWE Champion type. I think now that Hardy has evolved, and the fans are demanding he moves up the ranks. I think the fans would’ve liked to see Hardy beat Orton, but that didn’t go down, maybe because it was so close to Mania, and they feel that Orton is the guy to bring the title to Mania. Now the fans are seemingly not going to allow Hardy to fall back down to mid-card status and will still give him enormous pops that cannot be ignored.

Last week, his match with Jericho was a classic. I’ve been disappointed in Y2J’s performance thus far, but this match brought out a Y2J we haven’t seen since his return and he has Hardy to thank for it. Then tonight, as Jericho brought back the “Highlight Reel” segment, WWE gave Hardy that little something extra, some……attitude if you will. Hardy proclaimed that he wasn’t just the “sit back and take it” guy anymore….after Jericho told him he was no longer his friend, he was just a target….so uncharacteristically, Hardy dropped Jericho on his ass with a twist of fate!

Now I’ve never been the type to throw on a Hardy shirt, some tassels, and hop around the room and do the Hardy dance with some glowing paint, but I thought this segment really gave Jeff a new perspective….a take no shit Jeff Hardy. Usually, he’s the guy that will just go out and kill himself and as long as the fans are happy, that’s all that matters. But tonight, we get a Hardy that’s kicking ass and taking names.

My one worry in this situation is that Hardy gets super popular….is put in there with someone like Jericho who is also majorly popular, and Hardy chants are still blowing away popular guys like Y2J. So that means Hardy’s popularity is about to hit its height, and when it does, if WWE doesn’t capitalize and get the title on this guy, the opportunity will be gone and they’ll lose a major chance to have a main event guy who will move merchandise and also breathe some fresh air into a stale ass boring WWE Title scene that now features a small group of guys that wrestle each other over and over.

Triple H has his place, he’s not going to suddenly explode on the scene as the hugely popular star, he’s been there, it’s now over, and he has his spot. Cena, same situation, we’ve seen it, he’s a top star like it or not, but he’s done what he’s going to do and there will never be anything new from him. The same can be said for almost all the WWE main eventers…..Undertaker, Batista, Kane, even Mysterio the list goes on and on.

The current main event roster has done what they’re going to do, and WWE is just rehashing it all…..Hardy is the one guy whose popularity is red hot, and he NEEDS the win at Money in the Bank at Wrestlemania, and start a huge angle of some sort that will end with a title shot, and win. If he does not win, the opportunity will be lost for Jeff Hardy to move up to the main event level the fans are desperately calling for in my opinion.