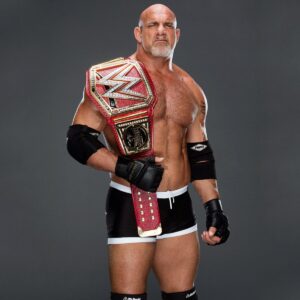 With the 2018 Royal Rumble just days away, WrestleMania season will be in full swing and that means it’s time to begin the traditional reveal for the 2018 WWE Hall of Fame Class. As with most years, WWE is kicking things off with the year’s headliner and as announced on WWE.com, Bill Goldberg is getting the call.

When Goldberg returned to WWE in 2016, it seemed like it would be a one-time return that would be a bit of a novelty being he was included in the yearly WWE game; that match turned into a shocking victory for Goldberg over Brock Lesnar and went on to become a full-on reconciliation with WWE.  You may remember Goldberg’s time in WWE from 2002-2003 which was less than stellar and one that Goldberg has openly talked about in a negative manner over the years.  One thing he always said was that a return to WWE was always possible if it meant his son got to see him in the ring.  Not only did Goldberg get to perform in front of his son, but he got a WWE Universal Title run and another WrestleMania match as well.

While his reconciliation has been well-documented over the past year, Goldberg’s Hall of Fame induction will undoubtedly also be a celebration of his time in WCW where he became a legitimate megastar.  From being a virtual unknown wrestler to becoming an undefeated phenomenon in a matter of months, Goldberg went on to become one of THE top wrestling stars of the 90s, especially after defeating Hollywood Hulk Hogan for the WCW Championship in one of the highlights of the entire Monday Night War.

It was great to see Goldberg presumably end his wrestling career on a high note, now he will be celebrated once again and take his rightful spot in the WWE Hall of Fame on WrestleMania 34 weekend in New Orleans.