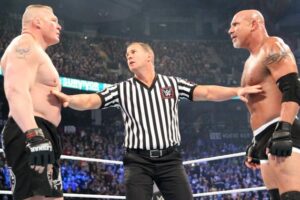 The Survivor Series main event featuring Brock Lesnar taking on the returning Goldberg was seemingly already as unique as it gets when it comes to today’s WWE – the fact that they brought back Goldberg for a main event match when their entire focus recently seems to have been on the next generation, on top of the fact that they haven’t had the best relationship with him over the years was a big deal from the get-go.  Even though it was great to see WWE thinking outside the box and going with a special match that you couldn’t see any other week on free TV, it was pretty much a lock that Brock Lesnar would be getting his WrestleMania 20 win back.

Over 6 years ago we wrote about Goldberg negotiating for a WWE return, but even then it was clear that WWE wanted to focus on their own future and not a guy who was a megastar for WCW.  The one thing that Goldberg always stated is that he would make a return if it meant his son would get to see him in action live, but the way WWE would use him seemed to be the X factor that would always shut down negotiations….it was clear WWE wouldn’t let their young stars be destroyed by an older star, which is one of the problems which has kept WWE in a stale state for the most part.

Things changed at least slightly earlier this year when Goldberg became the featured star in the WWE 2K17 video game and it seemed like the door was at least open again for a Goldberg return.  Who would have thought that just a few short months later, Goldberg would be back in a WWE ring and creating a moment at this year’s Survivor Series that will be remembered for a very long time.

If you would have asked me 24 hours ago what the chances were of a Goldberg win in his match against Lesnar, I would’ve probably said 40-50% just because of the story they presented – the father who just wants to have a match for his son, the feel-good story if he somehow won, but IF he won it would have been due to interference or some last-minute stroke of luck after a BRUTAL beating from Brock; instead, what I saw left me and the rest of the wrestling world in shock. 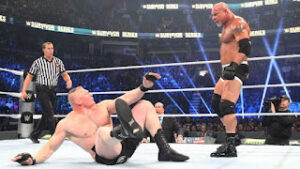 Goldberg squashed Brock Lesnar at Survivor Series – Lesnar got no offense in at all and was pinned in under 2 minutes after 2 spears and a jackhammer…sounds like something you would see on a 1998 episode of WCW Nitro!  The fact that the 49-year-old Goldberg absolutely destroyed the guy who ended The Undertaker’s streak is mind-boggling, but at the same time awesome since today’s WWE can be so predictable most of the time.

It was a little bit MMA, it was a little bit old school wrestling where you HAD to watch because anything could happen, topped off with a little bit of “why not?” Take one look at Goldberg and tell me he isn’t a guy that can beat anyone at any time; no one brings his type of intensity and it’s a variable that made wrestling fun to watch in the 90s. Go back and watch the faces in the crowd and check out how the Internet has exploded (with both positive and negative opinions) following Goldberg’s shocking victory.

So where does Goldberg go from here? Why did this all happen? There have already been rumblings of a Goldberg appearance at the Royal Rumble or even WrestleMania 33, and after the momentum created last night we could see those things happening.  Brock Lesnar will probably get another rematch at some point, but last night WWE captured a bit of what makes MMA so popular – the unpredictability that’s been sorely missing from wrestling for far too long. For anyone that thinks older guys shouldn’t win strictly because of their age, tell that to Bill Goldberg.