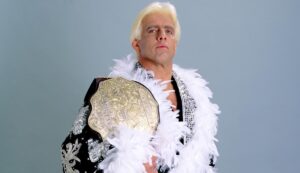 Today’s top wrestling news story is a big one and comes to us directly from the WWE Website! Read on for the news about the Ric Flair statue, the SmackDown women’s title match, The Undertaker versus Roman Reigns, and more!

“At WrestleMania Axxess on Thursday night, a life-sized statue of the stylin’, profilin’, limousine riding, jet flying, kiss-stealing, wheelin’ n’ dealin’ son of a gun was revealed in front of hundreds of members of the WWE Universe and the two-time WWE Hall of Famer himself.”
Read the rest of the story on the official WWE site here: Ric Flair statue revealed at WrestleMania Axxess

There were rumors (via WrestlingInc.com) that the SmackDown Women’s title match had been moved from the Kickoff Show to the main card. It looks like Becky Lynch has confirmed the move!

This comes to us from top professional wrestling publication Life and Style Magazine. Check out Brie Bella on Instagram:
Is The Undertaker Celebrating His Birthday By Passing The WWE Crown To Roman Reigns?
See what this guy has to say about it: http://www.inquisitr.com/4103488/wwe-wrestling-news-the-undertaker-birthday-passing-crown-roman-reigns/
0Shares
Tags: Brie Bella, Ric Flair, Roman Reigns, The Undertaker, Wrestlemania, Wrestlemania Axxes, WWE