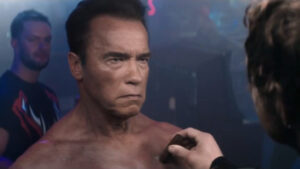 It seems to have become a tradition for the yearly WWE game to feature a spectacular return or debut that is a major selling point for that year’s game; last year it was Sting’s first-ever appearance in a WWE game, a few year’s earlier it was Brock Lesnar’s first WWE appearance in many years, this year 2K is once again going big with a major headline superstar but for the first time it will be one from outside the wrestling world.

WWE Hall of Famer Arnold Schwarzenegger’s Terminator will be a playable character in WWE 2K16 and his costumes from both Terminator 1 and 2 will be featured.  This is quite a crossover and will probably bring an outside appeal from gamers that normally aren’t into wrestling games.  It seems like Schwarzenegger being featured as part of Triple H’s entrance at WrestleMania was a huge crossover in itself, but this will be even bigger given the fact it will allow players to live out a fantasy scenario where the Terminator does battle with WWE Superstars.

2K made this announcement in a huge way by releasing a re-creation of one of the famous Terminator scenes, except Schwarzenegger is confronting WWE Superstars like Daniel Bryan, Paige, Finn Balor, and Dean Ambrose.  This video really is awesome and is the perfect hype for the game.

With all the Hulk Hogan controversy including the fact that he has been removed from the 2K16 game over it, this news of The Terminator being the game brings back a good vibe that this game will indeed deliver and be the best game yet in the series.  Check out the first look at The Terminator vs. WWE Superstars in 2k16 below: