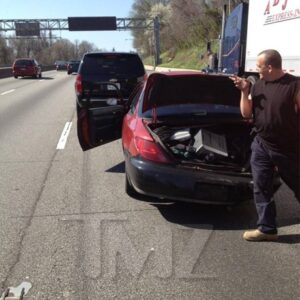 In what could have been of the biggest disasters in WrestleMania history, John Cena was involved in a car accident on his way to Philadelphia for RAW.   TMZ has posted photos from the crash site where Cena was in an SUV and was rear-ended by a smaller car that was also hit by a tractor-trailer.

Early reports are that Cena was OK after the accident but would be checked out by WWE doctors as soon as he arrived at the arena for RAW.  WWE later posted a bit of a teaser on Twitter that Cena was “seen holding his neck” as he arrived at RAW, which of course just could be a bit of a storyline boost as Cena is set to face Mark Henry tonight, just 2 weeks out from WrestleMania 28.

Of course in typical wrestling fashion, many will see this accident as part of an angle and imply that The Rock had some part in it.  Although The Rock has promised a surprise tonight on RAW, this was incident is the real deal and not part of any angle.  This could have really messed up WrestleMania 28 had it been more serious, but thankfully it looks like it’s not.  Should be interesting to see how WWE handles it tonight and if they will use it to get a bit of sympathy with Cena going into his match with Mark Henry and in 2 weeks with The Rock “injured.”