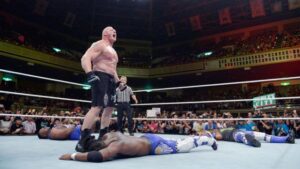 If you were up at 5 AM (ET) this morning, you got to witness a truly unique WWE live event emanating from Tokyo, Japan (if not, it is of course now on-demand on the WWE Network.) “Beast in the East” delivered a unique card that most fans of pure wrestling and the traditional Japanese style of wrestling surely appreciated.  There were no in-ring promos, no run-ins, and every match ended in a pinfall; yes, Beast from the East gave us…..wrestling.

Looking at the card prior to the show, it was pretty evident which matches would be something special, and things pretty much played out as so.  Chris Jericho vs. Neville was a great match for the generations that you wouldn’t see anywhere else, Brock Lesnar’s utter destruction of Kofi Kingston was as brutal as most expected, and Finn Balor vs. Kevin Owens was a classic on so many levels and was the true main event of the show.  Check out the results of the live broadcast below:

This was a unique match in that Jericho doesn’t even wrestling on WWE TV currently, but of course, fans always talk about dream matches with someone from the new generation like Neville taking on a huge star like Jericho.  This clash of generations produced a great match, and Jericho is a legend in Japan due to his roots there prior to arriving in ECW in the 90s even.  Announcers Michael Cole and Byron Saxton were really good here, talking about Jericho’s past in Japan as “Lionheart” and referencing his classic moves like the “Liontamer,” which Jericho won with via submission.  Was a bit surprised Neville didn’t get the win being he is a current WWE star, but Jericho winning works too because Japan respects legends and Jericho can still go in the ring for sure.

The Divas had to work hard here since a 2-minute throwaway match simply wouldn’t work in Japan.  Paige was over the with Japanese crowd and eventually, all three were getting nice reactions.  I’m sure Paige’s submission and all-around wrestling skills played a big part in her winning the crowd over.  Nikki wins with a stiff forearm to Tamina, which is a perfectly fine finish as EVERY match does not need to end with a signature move.

This match was exactly what you’d expect, but none the less it was a great showcase of Brock Lesnar to the Japanese audience; the “oohs” and “ahhs” from the crowd over Lesnar’s presence alone showed that this match fit right in on this card.  Lesnar no-sold all of Kofi’s offense, German suplexed him like a rag doll a few times, finished it off with an F5 and that was that.  The crowd ate it up but even cheered on Kofi as the underdog.  After the match, Lesnar continued his beat down until the other new day members ran in but were treated to more of the same.  Japan has always loved their monster wrestlers, and Brock Lesnar just screams “global attraction” as Triple H put it.

This match was truly something special that will be remembered for years to come.  The fact that WWE allowed Japanese wrestling traditions such as the streamers and the geisha girls giving the competitors flowers (which Owens subsequently tossed from the ring) was great and gave this match a special vibe from the get-go.  Of course, it was expected that these two would tear the house down and that’s exactly what they did; Cole and Saxton continuously mentioned Balor’s roots in Japan and how this match was a homecoming for him.  Balor wins after his double stomp from the top rope to win the match and the NXT Title.  Owens is most likely done with NXT and will be full-time on the main roster.  WWE Hall of Famer Tatsumi Fujinami came to the ring to congratulate the new champ Balor after which Balor tried to shake Owens’ hand but of course, Owens walked out on him (Owens seriously does “prick” better than anyone in wrestling in years!)

Nothing was going to follow Balor vs. Owens, but this match was just a basic tag match that could’ve been seen on any house show.  It’s most likely just novelty for Japanese fans to see Cena at this point, and this match could’ve easily traded spots with Owens vs. Balor.  Nothing special, typical win for Cena and Ziggler, but overall not a terrible way to close what was a truly unique event.

WWE Beast in the East was a great idea in my mind since I loved the old “Japan Supershows” back in the 90s and have always loved seeing American wrestlers in Japan because of the different vibe and crowds.  Hopefully, WWE continues to do even more of these special events because many of us are tired of the same old product every Monday night.  One thing is for sure coming out of this event, Finn Balor has arrived and is ready to be a major star for NXT and eventually the main roster.