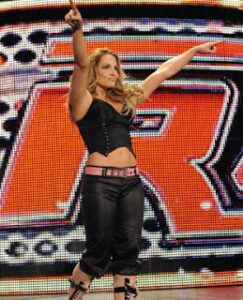 It’s been a while since I’ve done a “Remember When…” post…and usually a post I’d make on a memorable moment from the 80’s or 90’s – but for the first time today I’m posting a “remember when” from not even a year ago; it was such a great moment it deserves the recognition.

In a recent post I commented how great WWE Diva Maryse is and how it’s good to see she’ll be getting a big push on RAW with some people even comparing her to Trish Stratus. Well Maryse is good and hopefully she becomes a big star, but she’s no Trish yet.

Trish Stratus is probably the only “main event” level Diva to hit WWE since Wendi Richter was a star in the mid-80’s. Trish brought the star power to the Diva division and went from being just a mega hot blonde coming out to manage Test and Albert to becoming one of the best all time in-ring women performers ever. Trish’s feuds with Lita, Victoria, and Mickie James were all great stories to follow. When Trish retired in 2006, the Divas took a major step backward and it’s been a rebuilding process ever since. Now I’ve already posted once when Trish made her return to WWE, but it was such a great night I’ve decided to do this follow up post, with the video of the match included!

Fast Forward to this past Christmas in 2008; RAW was a few days from Christmas so WWE actually thought outside the box for once and gave us a fun entertaining main event as opposed to the same old tired main events every week where the top guys feuding get put into a lame handicapped match and whichever 2 are wrestling at the next PPV have a big stand off to end the show.

Santino and Beth Phoenix challenged John Cena to find a Diva to team with in an inter-gender tag match in that night’s main event. Being that RAW was in Toronto that night, the rumors were heavy that Trish would appear, but actually wrestling was still a surprise. When the story unfolded most people probably knew it would be Trish, especially since the match was put in the main event spot so someone big had to be in the spot, and only Trish would fit that role, especially in Toronto.

When Cena announced Santa had brought him a new partner and Trish’s music hit, the place went wild – a huge reaction only a Diva the caliber of Trish Stratus could get. In the match, Trish hadn’t missed a step and we finally got a glimpse of Trish vs. Beth Phoenix, which is a match that’s been talked about ever since Phoenix hit the scene.

It was evident that Trish was the star in the match as Cena was booed as usual and Trish was cheered wildly in her home country, but Cena played his role well – letting Trish have most of the spotlight. Cena got the win, which I guess was the only finish that could happen since Trish pinning Beth would kill any future dream match scenarios with Trish vs. Beth 1 on 1, but Trish still shined bright and WWE delivered a great feel good ending to a Christmas edition of RAW.

If WWE did more of this type of stuff, it’d be such a better show and would keep us guessing. On a side note, when the WrestleMania 25 Divas Battle Royal was announced I figured it was a definite that Trish would be in it and probably have a big role in the ending. But after the disappointing way WWE presented the former Divas, just thrown in the ring with no entrances or anything, I’m GLAD Trish turned them down as she definitely knows how to pick her spots and only appear when it’s meaningful.

Thankfully Trish has left the door open for a return, saying she’d do it for the right story and I’m sure between Natalya, Phoenix, and DEFINITELY Maryse, there’s still some Stratusfaction to be had by us all in the future.

Here’s the match from this past December, Glamarella vs. John Cena and Trish Stratus.