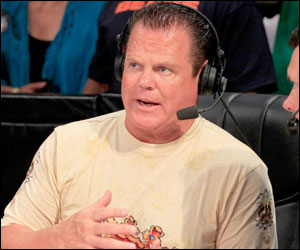 Earlier tonight at Monday Night RAW in Montreal, Jerry Lawler experienced a medical emergency during the live broadcast.  Lawler collapsed at ringside in what was described as quite a scary situation as paramedics had to administer CPR.  The commentary on the broadcast came to a halt and the rest of the show had no commentary at all.

Throughout the rest of the broadcast, Michael Cole only appeared in between segments to give updates on Lawler’s condition.  Cole was quite shaken originally and let us know that this wasn’t part of the “entertainment” tonight and was a very serious situation.  By the end of the broadcast, Cole was able to provide a somewhat positive update as he let us know that Lawler was both responsive and breathing on his own.

This was an out of nowhere type of occurrence as Lawler has still been semi-active in the ring the past few weeks and involved in a storyline with CM Punk.  Let’s hope this turns out for the best and The King is back on RAW soon, our thoughts are with the WWE Hall of Famer.