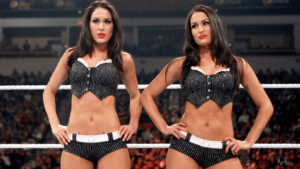 The word has circulated for the past month that the Bella Twins’ contract was set to expire at the end of this month and that they were opting not to stay with WWE. WWE threw a curve ball last week when Nikki Bella won the Divas title from Beth Phoenix, which is something you normally wouldn’t see happen with a talent that is on her way out. Tonight on RAW, the Bellas wrapped up their WWE tenure and are now officially gone from the company.

Last night at Extreme Rules, Nikki Bella (or Brie Bella as it happened) lost the Divas Championship to the returning Layla. Tonight on RAW, both twins lost in seconds to Layla, and then WWE.com ran a backstage angle where Eve Torres “fired them” to explain them being gone. It’s actually nice to see WWE mixing it up and throwing everyone off when it’s time for a talent to leave, rather than just seeing it on WWE.com.

Should be interesting to see what opportunities the Bellas go for next, whether it be TNA, independent appearances, or something outside of wrestling all together. One would think their unique presentation as twins will most likely bring many opportunities their way.