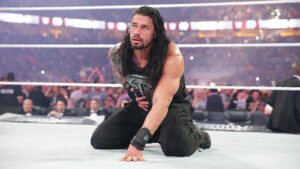 WWE has officially announced that Roman Reigns has been suspended for 30 days for his first violation of their Wellness Policy.  This news comes as a real shocker since Reigns has of course been “The Guy” both on TV and behind the scenes for a couple of years now, with the company refusing to use him in any lesser role despite the fact that he’s been welcomed by a chorus of boos at most events.

Now that the news of Reigns’ suspension has been made public, it raises a lot of questions as far as what we’ve seen on WWE TV over the past few days – did WWE know about Reigns’ suspension ahead of time which was the reason for Dean Ambrose’s WWE Championship win? Did WWE book the triple threat match with the former Shield members for Battleground so that Reigns could serve his suspension but still be able to return in time for that match? And can you imagine the level of heat Reigns will now receive from fans upon his return given they know this information?

This really is shocking because I would almost expect WWE to protect the guy they’ve been trying to get over for so long, but I guess him screwing up has done him no favors within the company.  It seems that Reigns will have to turn on Ambrose in some fashion now more than ever since trying to be the nicey nice good guy will be even harder now.

You know it’s serious business when WWE is using a main eventer’s real name.  So far Reigns released this statement on his Twitter:

“I apologize to my family, friends and fans for my mistake in violating WWE’s wellness policy,” Reigns tweeted. “No excuses. I own it.”

So there you have it, no Roman Reigns for a month.  How will WWE explain this on TV while at the same time building to the Battleground triple threat match?  I have a feeling they won’t change the match, but that’s always a possibility too.