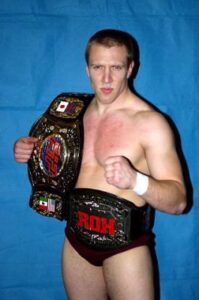 Tonight one of the best segments, if not THE best segment ever produced by NXT aired. Ever since the show began, Michael Cole has been on Daniel Bryan’s (Bryan Danielson’s) case for being an “indy guy” and an “Internet sensation,” but not having what it takes to be in WWE. This story is rare for WWE, actually playing off realism here and actually acknowledging that Bryan is a big star outside of WWE and internationally.

Last week Bryan was one of the first guys eliminated from NXT, even though the “pros” have constantly rated Bryan at the top of the list, even though he’s been booked to lose every one of his matches. The reality is that everyone knows Danielson is one of the most exciting in-ring performers of this era and it’s good to see all of this looks like it will actually keep going story-wise.

After being eliminated, Bryan walked the line of reality as he mentioned Daniel Bryan being a WWE creation, a nice guy, etc., but Bryan Danielson was the guy who is the international star and champion everywhere he’s been. This type of thing is very rare for WWE, which usually tries to pretend guys don’t have any pasts, and only what they do in WWE counts.

Tonight things went a step further, as Bryan was interviewed in the ring about his elimination. Bryan once again mentioned being eliminated by WWE management, not the fans or pros, and shot on the fact that many of the pros know he is the best. Then things got ugly, as the real Bryan Danielson came out and shot on Michael Cole for his weekly comments about Danielson having no personality and not having “it.” Danielson called Cole a “poor man’s JR,” (another rarity since JR hasn’t been mentioned on TV, and his contract has expired) and proceeded to get in Cole’s face and slapped and kicked Cole before being restrained.

This segment was very well done, and the intensity was brought by Bryan. While this was an intense story that blurred the line of reality, it brought back memories of the angles that really make people question what they are seeing. How real was it, how scripted, was it a shoot? All questions that stir interest, and no wrestling promotion is stirring interest like that right now.

So if Daniel Bryan being cut from NXT leads to Bryan Danielson ending up on one of the shows, getting in the ring, and going full force showing that he really does have “it,” then it will all make sense and make for one of the most intriguing storylines in years…..who can argue that slapping Michael Cole in the face isn’t a great start to it all.