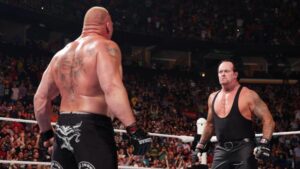 WWE Battleground has set the stage for this year’s SummerSlam and has done so in a shocking fashion. Leading into the show there were rumors swirling about The Undertaker making a surprise return to WWE, but actually seeing it happen and the response that followed really created a buzz and opened the door for a ton of speculation.  Before we cover that, let’s look at the full results from the card:

Has anyone really followed what these two have been doing the past few weeks?  Battle of the kings….on the preshow, OK.  Barrett wins and R-Truth’s comedy king act may be over, I can’t say anyone cares, they just can’t get anything to work for Barrett.

Orton was over huge here in his home state, but Sheamus is another guy that just seems so boring and played out to me…new look or not.  Pretty typical match, the crowd demands the RKO and they get one as Orton picks up the uneventful win.

Decent tag match, kind of surprised the PTP walk out with another win over New Day since the group is still pretty hot and getting great heel reactions from the crowd.

This one started slow and felt like a typical Roman Reigns match until toward the end.  Things picked up as the fans really got behind Wyatt and were enjoying the back-and-forth action.  Finish saw a hooded mystery man interfere and help Wyatt pick up the win – the mystery man turned out to be Luke Harper who seemed to rejoin his former mentor Wyatt.

Stephanie McMahon herself announced this previously unannounced match, and it was already evident that the Divas were going to get much more of a spotlight from here on out.  Each of the three groups that were formed this past Monday was told to pick one representative for this match.  Banks and Charlotte have had many classics in NXT but obviously had to slow things down a bit with Brie involved.  It’s evident that the current Divas can’t hang with these NXT ladies, so the future matches should prove to be interesting.  Charlotte wins the match by getting Brie to tap out to the “Figure 8” which was a smart move based on who was in the match.  Actually looking forward to the next Divas showdown after this.

What can be said about this one?  Owens and Cena have another match filled with big moves, plenty of near-falls, and then we get Kevin Owens tapping out.  Yeah, the guy that came in and pinned Cena clean making him an immediate star has now had to lose to Cena twice, even tapping out this time… talk about a momentum killer.  Seems like Owens should just go back to NXT and continue feuding with Finn Balor since he’s just another guy Cena can beat on the main roster now.

Here’s where things got interesting – Lesnar of course absolutely manhandled Rollins, taking him to “Suplex City” around 13 times and allowing very little offense from Rollins.  Before we knew it, the infamous “gong” of The Undertaker’s music hit as the lights when out, and as they came back on “The Deadman” stood face to face with Lesnar and it was immediately apparent that the events of WrestleMania 30 had not been forgotten.  Undertaker laid a beat down on Lesnar that included a kick to the groin and two Tombstones…. the match subsequently ended.

The somewhat surprising part of it all is that The Undertaker’s heel-ish actions got a huge positive response from the crowd – maybe not so much that they were glad to see him do it to Lesnar, but more so that they were thrilled to see The Undertaker in person. These actions do of course open up some major speculation – this will undoubtedly set up an Undertaker vs. Lesnar match at SummerSlam, but will it be a straight one on one showdown to settle a major issue, or is there a chance The Undertaker has aligned himself with Rollins and The Authority?  ….that would make for some very interesting TV.

Battleground 2015 was relatively uneventful until the very eventful main event; SummerSlam will now start to fill out and the huge Undertaker vs. Brock Lesnar showdown will definitely be one of the major main events on the show.  Tonight on RAW we will undoubtedly find out more, and it will also be interesting to see where WWE Champ Seth Rollins goes from here now that The Undertaker allowed him to “slip out the backdoor” once again with the WWE Title so to speak.