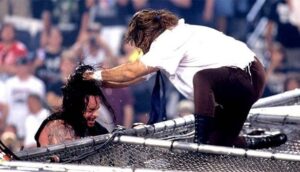 We’re throwing it back to the Attitude Era today with an infamous moment that will likely live on forever via WWE highlight reels.

Just about anyone with any level of familiarity with pro wrestling knows of the Mankind vs. Undertaker Hell in a Cell match – most notably, Mick Foley being thrown from the top of the cell. When thinking back to watching this event live, a few things came to mind –  this wasn’t the only Hell in a Cell match on the card, this wasn’t the main event, and this didn’t feel like it would be the payoff to the Undertaker/Mankind feud as the two had been feuding off and on for nearly two years. Frankly, it didn’t feel like anything historic would come out of this match.

That’s not to say there was anything negative going into this match, almost every Undertaker vs. Mankind match was good, and the duo created tons of memorable moments so seeing them inside Hell in a Cell sounded exciting, it just wasn’t the match that I thought would have the whole wrestling world talking.

It felt like Steve Austin vs. Kane inside the Cell was the match to see – it was for the WWE Championship, it was a first-blood match, and it took place when Stone Cold was still fresh as champion so everything he was involved in was must-see. While the WWF Title match was the final match of the night, it’s almost forgotten that Mick Foley somehow appeared during that match as well, AFTER the brutality he endured against The Undertaker.

Of course, Foley’s infamous fall from the top of the Cell is the most talked-about part of the match, and it’s crazy to think that it happened during the very early stages. Foley’s second fall through the roof of the cage and to the ring was even more brutal, although mainly to those that know how hard a wrestling ring is.

Below is Foley’s infamous first fall through the cage. The opening and really the entire match shows how two performers at the level of Mick Foley and The Undertaker can keep a feud going for nearly two years and steadily progress to this level of brutality, which really made all of it mean even more:

1Shares
Tags: Hell in a Cell, King of the Ring, Mick Foley, Remember When..., The Undertaker, WWF