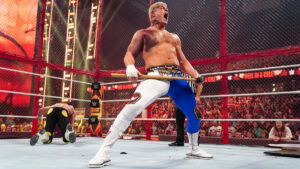 After giving one of the most memorable performances ever at Hell in a Cell, Cody Rhodes now faces the other side of the coin as he is on the road to recovery after successful surgery to repair his torn pec. Cody’s wife Brandi confirmed the success of the surgery this week:

The doctor just repaired Cody’s pectoral tendon which was torn completely off the bone. Successful surgery. He is on the road to recovery now.

The fact that Cody competed with such an obvious injury has been a huge talking point in the wrestling world this week. Cody appeared the following night on RAW and hinted at competing in the upcoming Money in the Bank ladder match which is just weeks away, but bar some crazy but safe angle taking place, we likely won’t see that happen. This was solidified by the Seth Rollins attack which storyline-wise extended Cody’s recovery time. Now the question is, how long WILL Cody be out of action?

The most recent similar injury that comes to mind is Triple H tearing his pec a few years ago at Crown Jewel, and he was able to return in about 5 months. Before that, John Cena shocked everyone by returning from a pec tear in only 3 months. While both of these recoveries were faster than average, WWE announced on Smackdown that Cody will be out for 9 months.

Now the question is, is WWE aiming at 9 months in hopes that Cody is back for the Royal Rumble? Or is WWE putting a bigger number out there to throw everyone off of a much-sooner return? Whenever it is, Cody’s return will undoubtedly see him step right into the title picture as this injury and Hell in a Cell performance elevated him beyond where he already stood with the company.