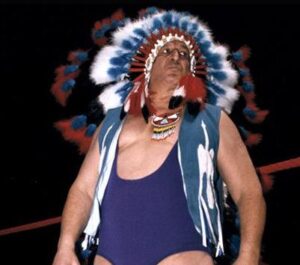 Sad news to report today as WWE Hall of Famer “Chief” Jay Strongbow has passed away at age 83.  Strongbow (real name Joe Scarpa) debuted in 1947 using his real name before adopting the Chief persona many years later.  Strongbow was a multiple-time WWWF/WWF tag team champion, and also had successful run in Big Time Wrestling in Detroit.  Throughout the ’80s and ’90s, Strongbow had retired and worked as a road agent for WWE.

What many may not know is that while Joe Scarpa portrayed the Native American character “Chief Jay Strongbow,” he was actually Italian American.  Strongbow was from a great era when wrestlers could fully present a character and keep their personal business separate.  For many years you could see Strongbow on WWE TV at ringside in his agent position and even made a few cameos over the years, most recently in 2008 on RAW.

In 1994 Strongbow was inducted into the WWE Hall of Fame by Gorilla Monsoon, and his character was solidified then as an iconic figure in WWE history.