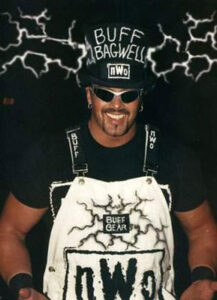 A bad bit of news to wake up to today as TMZ reports that former WCW star Marcus “Buff” Bagwell was involved in a serious car wreck that has left him with a broken neck and multiple other injuries.  Many of you may remember Bagwell broke his neck in the ring on WCW TV back in 1998.

The report indicates Bagwell called his wife and indicated he was about to have a seizure before losing control and flipping his jeep in an all too similar fashion to the way we lost Randy Savage last year.  Bagwell was transported by emergency personnel to an Atlanta hospital where he was sedated due to the severity of his injuries.

Marcus Bagwell was a regular in WCW throughout the 90s and played a major role in the WCW/nWo boom period in the late 90’s when he came into his own with the “Buff” character.  Here is to wishing Buff a speedy recovery, as he has fought his way back from a similar injury in the past and no doubt has what it takes to overcome adversity once again.