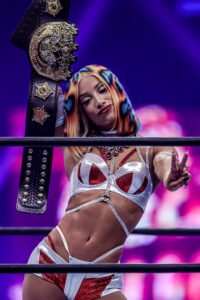 While rumors of Moné joining NJPW and appearing at Wrestle Kingdom weren’t really kept under wraps, her debut was grand and really felt like a major star had arrived. Since Mercedes and Naomi famously walked out on WWE during Monday Night RAW, there’s been much speculation about the duo’s future, with a return to WWE almost seeming certain after Triple H took over. Now, as seen at Wrestle Kingdom, it’s official that at least Mercedes has moved on for the time being and will embark on new endeavors.

After her grand entrance at Wrestle Kingom, Mercedes laid out former WWE star and current IWGP Women’s Champion Kairi then challenged her to a match at “Battle in the Valley” in San Jose next month. This whole scenario tells us that Moné is starting at the top and will undoubtedly be a main eventer for New Japan.

Mercedes Varnado’s WWE contract officially ended this past weekend, so now the question is, could she pop up anywhere else? Namely, AEW. With Mercedes Moné making a big money deal with New Japan, a similar deal could be struck with AEW, but would it be best for her career? The fledgling AEW women’s division has failed to garner much interest even though they do have some great talent. Mercedes would undoubtedly walk in and be at the top, but could she do enough to bring the division to prominence? It’s interesting to note that AEW is promising a mystery partner for Saraya on the January 11 edition of “Dynamite,” and we can’t think of a bigger available name than Mercedes Moné.

Check out the epic debut of Mercedes Moné at Wrestle Kingdom 17 below: