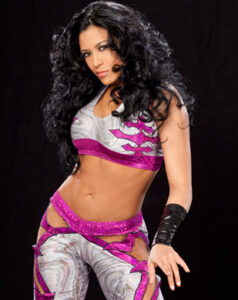 Looks like it’s time for another “Black Friday” for WWE as they have released several talents.  Most notable are Divas Melina and Gail Kim.  In the case of Kim, it sounds like she may have quit rather  than released, but the details are sketchy.  You may have noticed Monday on RAW that she eliminated herself from the battle royal, later explaining on her Twitter  that she was simply doing as she was told which was to “go out quickly.”  Looks like she was legitimately not happy with her WWE status, and just like that she is gone.

Melina is another underutilized Diva who was once one of the top Divas in WWE.  Going back to her debut with MnM, she has always had a pretty big spot in the company including multiple title reigns.  Her behind-the-scenes relationship with John Morrison, then Batista, now back to John Morrison had caused some turmoil in the past, but at this point, she was barely being used for no real reason.

Also gone from WWE are Chris Masters, Vladimir Kozlov, and David Hart Smith, all 3 of which were barely used other than maybe WWE Superstars and really won’t affect any of the current WWE stories.

As far as what’s next for the talents released, TNA/Impact Wrestling should no doubt be making calls to Gail Kim (who helped put the Knockout division on the map with Awesome Kong in 2007) and Melina due to her name value (unless there is heat with any of the current Knockouts.)  The rest are hit or miss.  D.H. Smith was on Hogan’s reality show once and of course is the son of the British Bulldog so there is a chance Hogan would want to bring him in.  Masters has the body that Impact may like, and Kozlov is a maybe/maybe not.

Impact definitely uses the women in stories and much longer matches, so maybe the release of Kim and Melina will turn out for the better for them, although Melina will have a much harder road being she will be separated from longtime boyfriend John Morrison.