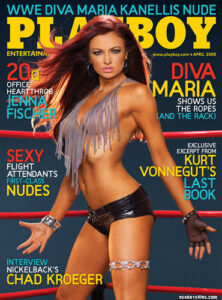 **UPDATE** Maria Kanellis Goes Topless in the Movie “Opposite Sex”

Here is the much-anticipated cover for Maria’s upcoming Playboy Magazine, which is due out next week. Maria was a great choice for this year’s WWE Playboy cover, instead of just whoever won the Diva Search like they’ve done the past couple of years.

Judging by the cover, this will be one of the better pictorials as well, hopefully without a ton of airbrushing, as Maria is just fine without all that crap (hard to believe we’ve come from Chyna, all the way to Maria, my how things have improved!)

We have the cover for all you Maria fans, and we’re revealing it before you’ll even see it revealed this Monday on RAW, and I’ve thrown in a few preview pics as well.