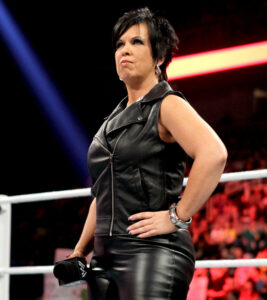 SmackDown writer Michael Hayes was the one who pushed for the heart attack route in the Kristal & Theodore Long wedding storyline. He had been wanting to do an angle involving Viagra for quite some time. The Viagra-induced heart attack on the night of the wedding had actually been scripted since June. Hayes was strong on the Viagra part of the storyline, knowing Vince would love it and that it was a believable drug to trigger a heart attack.

The plan from day one was for Vickie Guerrero (and at one time Kristal, but she’s likely staying on as a babyface) to get a hold of Long’s medical records, find out about his medical issues, and orchestrate this whole thing out in the storyline. The big goal of the storyline is to turn Vickie Guerrero into a major heel. Though it was argued by some in WWE that getting major heat on Vickie would be compromised by the Viagra aspect of the storyline that made it somewhat of a comedy.

Nonetheless, as a result of the outcome of the storyline, Guerrero will turn into a major heel General Manager. She would then turn her wrath against Rey Mysterio in particular, to do a Hispanic version of Vince McMahon vs. “Stone Cold” Steve Austin. She would have also used Kristal in the ordeal and would subsequently fire her former friend from SmackDown.

The original plan for Kristal was for her to move to Raw shortly after the storyline. She’s currently in a real-life relationship with Bobby Lashley and since he had pull at the time, he asked Vince McMahon if she could move to Raw to be with him. Vince agreed, and she should be moving to Raw eventually. However, Lashley is going to be out of action until at least December, so her forthcoming move to Raw may be held off for a few more months.

Another idea being batted around to get Vickie even more heat from the fans is for her to start a relationship with one of the male wrestlers on SmackDown. The idea is that the wrestler would get preferential treatment from her, and it would make her even more of a heel to the fans because she’d be betraying her late husband Eddie Guerrero. The other idea being talked about is that the wrestler up for the role would actually be using Vickie in order to get preferential treatment from her, but Vickie would be trying to get the wrestler “in the sack” in exchange. The wrestler would tease the idea, but it would never actually happen in the storyline because the wrestler is not really interested in sleeping with her; he just wants to further his own career, and thus he’d be the one doing the using.

If Vickie ends up having a relationship with a wrestler, MVP appears to be the primary candidate for the role. There has also been talk of using Edge in the role, but MVP’s name has gotten more play.