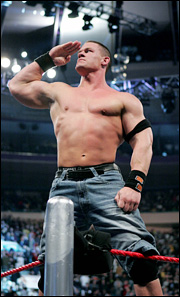 The 2010 Survivor Series has come and gone and basically going into the PPV there was only 1 match that had interest going in (thanks in part to Roddy Piper’s awesome promo from last Monday,) and that was Randy Orton defending the WWE Title against Wade Barrett with special referee John Cena.  The big stipulation of course was the “Free or Fired” situation, which was if Barrett won, Cena would be free from being a Nexus member, and if Orton won Cena would be “fired” from WWE.  Well as Cena told us Monday, he indeed called it down the middle, and counted the three count for Orton to win and retain the WWE Title.

As I watched the PPV, the hope many people had was this was finally the big heel turn for Cena that would ignite something fresh in WWE’s main event picture.  I figured something wild would go down, maybe Cena screwing over Orton and shocking everyone, but no such luck. Now WWE’s hope is everyone buying the fact that Cena is “fired” and tuning in to see what happens next.  Cena sold it hard, looking sad in the ring after the match and even doing a walk around the entire arena, as a supposed farewell to all the fans.

My big question is, does anyone even halfway believe this story at all?  I mean most of us know it’s all a work, but this one is hard to even suspend our belief on.  If the story was realistic, Cena would tell the anonymous GM to shove it up his ass and that if he got fired, he’d be heading to a little promotion in Florida for some…..Total Nonstop Action.  Now THAT would be realism, NOT Cena walking around moping and crying like he’s a nobody in WWE, and he has nowhere else to go if he’s fired.  Anyone with half a brain would think how dumb it would be for Cena to be fired, being he is a huge star like him or not.  He sells merchandise like no one else right now and has been a main eventer for years.  I could see him coming back as soon as tonight on RAW really, as we can see from a mile away that something will happen to bring him back.  Take note that the anonymous GM never chimed in tonight to officially “fire” Cena, so that door is left open for RAW to set something up there.

A Cena heel turn would have been nice, but WWE is obviously still afraid to lose all those merchandise sales, so I’m predicting we will see another lame “shocking” story that will bring Cena back, he will squash the Nexus, and WWE will continue on with the Cenation crap for as long as humanly possible.