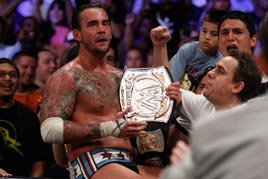 The much-anticipated match between CM Punk and John Cena at Money in the Bank lived up to the hype; the crowd was electrifying, the match was great, and the finish gave us a great ending while at the same time stirring things up even more.

CM Punk is the new WWE Champion after defeating Cena, and as the story goes, Punk is now gone from WWE.  We reported a couple of weeks back that CM Punk’s contract was legitimately expiring, but the situation has been kept under tight wraps which has created a great old school situation where no one really knows what’s going on.

The other stipulation was that if Cena lost, Mr. McMahon would fire him.  Of course, we’ve heard the whole “Cena is fired” thing before, but this story has been so compelling that it will be interesting to see how all of these circumstances play out.  Is Punk gone?  Will he show up at shows like Ring of Honor and New Japan with the WWE belt?  Will Punk end up showing up on RAW with a storyline explanation that he re-signed?  How will the Cena situation be handled?

Right now is one of the rare times where it feels like the Attitude Era is back, and the lines of reality are being blurred.  Vince is allowing things to be said on TV you normally wouldn’t hear, and real-life situations are being openly discussed on camera.  Let’s hope the days of Cena’s goofy promos, trying his damndest to make SOMEone believe them are over….and CM Punk will help usher in another great era of REAL pro wrestling.