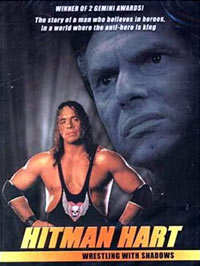 Thanks to our friends at SnagFilm.com for sending this along. The classic Bret Hart documentary “Hitman Hart: Wrestling with Shadows” is now available to watch online for free, and we’ve got it right here at ProWrestlingRoundup.com. For those of you who have never seen it, this documentary follows Bret Hart during the months leading up to the infamous Montreal Screwjob at Survivor Series 97.

What’s most interesting is that this documentary was just a bio on Bret Hart originally, but the crew happened to be filming during one of the most controversial stories in wrestling history. The film delivers an awesome look into the backstage goings-on in WWE during that era. Also included is a look at the Hart family, including the infamous dungeon, the history of the Harts in Canada, and even early glimpses of a young current WWE Superstar, David Hart Smith.

“Wrestling With Shadows” is great on so many levels, and gives many visuals of the stories told in Bret Hart’s book. Anyone that is a fan of the historical wrestling events, Bret Hart himself, or someone who is just curious on what all this history between Bret Hart and Vince McMahon will surely enjoy this film: