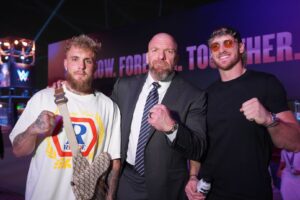 Since Logan Paul has been an instant hit in pro wrestling (at least performance-wise) it seemed like only a matter of time before his brother Jake made his way onto the scene as well. It didn’t seem like it would happen any time soon since Jake has found much success as a boxer, picking up a win over MMA legend Anderson Silva just days ago, but Jake Paul made a surprise appearance at the Crowd Jewel press conference to back up his brother against The Bloodline and it’s been made official that he will be in Logan’s corner for his match against Roman Reigns.

The Paul brothers have not been the most popular with wrestling fans, or boxing fans for that matter, but they are without a doubt media sensations and of course social media influencers. Do Jake Paul’s fights do huge numbers because everyone loves him? Highly unlikely, but people definitely want to see him perform as well as see what he might do next. The interest is there and it seems like Triple H is able to grasp where the interest lies in current pop culture.

The Logan Paul vs. Roman Reigns match itself feels like something that just wouldn’t happen in the old WWE. This is a celebrity crossover with athletes that have proven they can perform and entertain at the same time which is a rare performance in pro wrestling. Now WWE is doubling down with the addition of Jake Paul to the mix who will undoubtedly bring in even more outside interest.