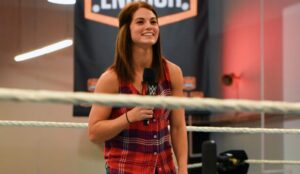 Sad news to report tonight as one of the winners of WWE’s 2015 Tough Enough competition, Sara Lee, has passed away at only 30 years old.

Sara Lee was a memorable character on Tough Enough where she was the underdog who had memorable interactions with the likes of fellow competitor Mandy Rose and coach Paige. Lee pulled off the win and earned a 1-year contract with WWE.

While Sara did appear on NXT shows, she was ultimately released in 2016. From there she actually went on to marry former WWE star Wesley Blake and they had three kids together.

Sara Lee’s mother revealed the sad news of her passing but gave no further details. Maybe the toughest part of this is that Sara herself posted on her Instagram just two days ago, noting that she was back in the gym after having a sinus infection.

Our condolences to Wesley Blake and Sara Lee’s family.