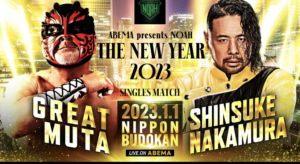 If anyone thought Triple H running things was only a benefit to WWE, the announcement that The Great Muta will take on Shinsuke Nakamura at NOAH The New Year 2023 pretty much proves otherwise.

Pro Wrestling NOAH announced the match this morning and it will be part of The Great Muta’s retirement tour. Seeing a WWE star taking part in a huge International event outside of the company is a throwback to the glory days when interpromotional dream matches were possible, but you’d only really hear about them in magazines back then.

Nakamura has been used sparingly lately (and that’s don’t a bad thing considering a complete rebuild was needed) but has made surprise appearances on NXT as well as on Smackdown this past week. Under Triple H’s vision for Nakamura, he was a major star and champion; sadly Vince McMahon didn’t have that vision and he became just another guy. Now Nakamura is being rebuilt, and this match with Muta seems like a great step in presenting him as an International legend once again.

Much is said about the “forbidden door” these days, but WWE stars being allowed to partake in matches like Muta vs. Nakamura opens up many possibilities and wrestling fans will benefit most. The Great Muta vs. Shinsuke Nakamura takes place at NOAH The New Year on January 1st, 2023 at Budokan Hall.