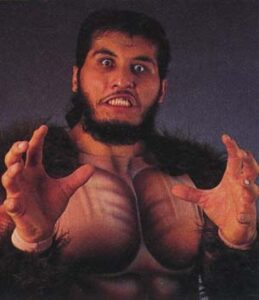 More sad news to report as the number of wrestling deaths this year rises again, as Jorge “Giant” Gonzalez aka “El Gigante” in WCW, has passed away at the age of 44.  Gonzalez was a monster 7 foot 7 giant that debuted in WCW in 1990 as “El Gigante.”  He debuted at one of the oddest pay-per-views in WCW history, Capital Combat, which saw Robocop appear and help Sting against the Four Horsemen.  Later in the night, Luger and Sting had more trouble with the horsemen, when suddenly this 7″7 robotic looking giant that no one had ever seen comes walking out to scare off the horsemen.  As El Gigante, Gonzalez worked in WCW in feuds with Flair, Sid, and the One Man Gang, but was always limited in the ring.

In 1993 Gonzalez yet made another odd debut, this time in WWE, as he came walking out during the Royal Rumble in 1993 to attack the Undertaker.  Gonzalez now sported a full airbrushed bodysuit, airbrushed body hair and all.  It was definitely one of the most unique choices in wrestling gear in history.  Gonzalez’s most high-profile match came at Wrestlemania 9 against the Undertaker, in which Gonzalez became number 3 in the Undertaker’s streak.  Gonzalez left WWE after SummerSlam of that year, losing to the Undertaker in a Rest in Peace match.  His WWE run was his last mainstream work on the U.S. wrestling scene, as he only worked overseas after that.

Gonzalez had suffered from complications from diabetes leading up to his death.  Giant Gonzalez was a memorable character that made an impact even though his time was relatively short in the wrestling world.  Here is a video that was shot a couple of years ago with Giant Gonzalez in his hometown: