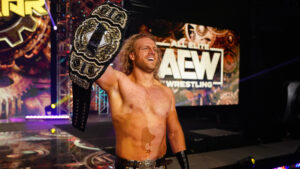 Last night on the special Tuesday edition of AEW Dynamite, the main event match for the AEW Championship between Jon Moxley and “Hangman” Adam Page came to a premature halt after Page was legitimately injured.

Moxley delivered a clothesline to Page, who landed awkwardly but couldn’t continue after going down. Referee Paul Turner stopped the match as the medical staff tended to Page. The announce team scrambled to fill the final 10 minutes of the show, and apparently, Jon Moxley’s promo following the match and subsequent interruption by MJF were all called on the fly as production needed something to end the show with.

Today, AEW has provided an update on Adam Page and he has been diagnosed with a concussion. In situations like this when it’s not clear if there is a head/neck injury, it was good to see AEW’s medical team spring right into action and take all the necessary precautions. It’s still not clear if it was Moxley’s clothesline or the way Page hit the mat or a combination of both that caused the injury, but hopefully in the end this will turn out to be a minor injury for the most part rather than what it could have been. Page was able to give the crowd a “thumbs up” as he was stretchered out which was at least a positive sign.

AEW’s official statement is below: