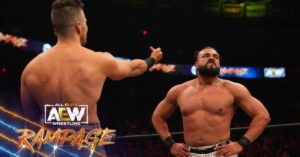 The messiness that has been the AEW locker room is obviously still an issue as earlier tonight Sammy Guevara and Andrade El Idolo were reportedly involved in a physical altercation after problems arose online between the two on social media this week.

For those that missed it, Sammy and Andrade’s back and forth on Twitter raised a lot of eyebrows, while others still felt this may have been some sort of work:

YOU didnt say shit to me you liar but heres some truth you ungrateful prick You would be jobless if it wasn’t for your dad in law. Are you really mad at me or mad at yourself for failing to get over for a SECOND time. Just go back to Wwe like we all know you want to do & fuck off https://t.co/licsudpp6o

Truth be told, AEW likely wants no part of any backstage fight-type angles after the utter disaster last month that saw CM Punk, The Young Bucks, Kenny Omega, and more suspended. Anyone with knowledge of the situation has verified that this is all legitimate, and that may come as no surprise since Guevara was involved in a similar backstage altercation with Eddie Kingston last month.

The issue between Sammy and Andrade seems to stem from the two having a match and Sammy complaining afterward about Andrade hitting too hard – a fact that Guevara is obviously denying took place. Andrade shared his side of the story on his Twitter:

Things apparently came to a head tonight and the two had a physical altercation that saw punches thrown. No word on who got the better of it, but it sounds like at least Andrade was sent home if not both of them.

Now the question is, how are the decisions being made as far as who gets suspended and who doesn’t? Four of the company’s top stars are suspended right now, while Sammy has been involved in two altercations (that have been reported at least) yet no action has been taken (that we know of.) Does the severity of the fight decide the repercussions?

One thing is for sure, AEW remains in a chaotic state with issues backstage not being solved or kept under control as of yet. While the ratings remain strong, it will be interesting to see how they are affected if these issues continue to plague the company for the foreseeable future, especially with sites like TMZ now covering these incidents.