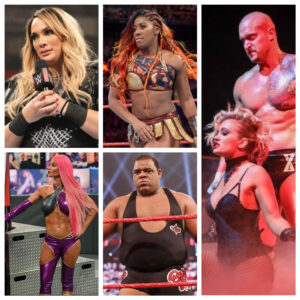 The winds of change are in major effect once again in WWE as the company has done another sweeping round of releases. Just 6 months ago we reported on WWE’s major round of releases that included Braun Strowman, Lana, Aleister (now Malachi) Black, Rubi Riott (now Soho,) and others, which shocked since since it followed April’s big list of releases that included Mickie James, The Iiconics, Samoa Joe (who as eventually rehired.) Now here we are a few months later with another big list of WWE releases which has us wondering what is actually going on in the company.

This list is a big one so for the most part we’ll just provide you with the names. There are numerous standouts here either because of either the person’s level of talent or the fact that WWE recently signed them or attempted to change the talent’s name and/or character which made it seem like they’d actually do something with them. From Keith Lee recently taking on the “Bearcat” nickname to Karrion Kross showing up on TV without Scarlett Bordeaux, who was obviously a huge part of his presentation as NXT’s champion, which had speculation running rampant that Kross’s big push would occur when Bordeaux joined him on TV.

Then there’s Nia Jax, who has had her fair share of flack over the past few years for some in-ring occurrences that most felt weren’t favorable – the most recent being her encounter with Charlotte Flair. Eva Marie is another head-scratcher, not because she was everyone’s favorite, but because of the big presentation she got for her return, which ultimately only lead to her heading right out the door.

Then there are talents like Ember Moon who has had several memorable moments in both NXT and WWE but seems to be another victim of being good in the ring, having a unique presentation, but WWE just not knowing how to book her. Franky Monet (formerly Taya Valkyrie) who changed her name and gimmick to come into WWE after already being an established talent, only to be shown the door months later.

As stated above, there are so many names and stories to go with the names on this list, it’s hard to pinpoint what WWE is doing but it seems to be a major overhaul. As we usually also state, this whole ordeal is like handing AEW the opportunity to beef up and improve their roster even further if they choose to do so.

Here are the WWE releases as of this writing: