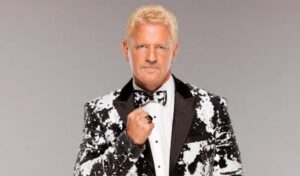 The new WWE regime continues to demonstrate that change is upon us, mostly from what we’re seeing on-screen. Apparently, things are shaking up behind the scenes as well, as Jeff Jarrett is reportedly gone from the company.

Jarrett was just named Senior Vice President of Live Events in May, but apparently, things didn’t work out. No word yet on if Jarrett was released by the new management or if he chose to leave on his own. Jarrett was given his new role when Vince McMahon was still running things, so it would make sense if the change in management was the cause of his exit.

Jarrett just appeared at SummerSlam in a bit of an odd spot, as the special referee for the Usos vs. Street Profits match. While Jarrett being from Nashville made sense, he seemed like an odd choice for an “enforcer” role that had no real connection to that particular match. Again, this was decided under Vince McMahon’s management, and it turned out to be Jarret’s last on-screen appearance.

The night after SummerSlam, Jarret was back in the ring for Ric Flair’s last match and had wrestled numerous times over the past year for companies like GCW. All of that is notable since Jarrett still has connections with numerous companies and hasn’t ended his in-ring career either. Could Jarrett pop up in a management position or even an on-screen role for AEW? Will he return to GCW where he was delivering a more updated version of his character? Or could Jarrett get involved in a new venture, which could possibly be further Jim Crocket Promotions events?

Jeff Jarrett has been a major player in pro wrestling for well over 30 years, so it’s almost a guarantee that we’ll see him pop up in another wrestling company soon. His successful “My World” podcast will continue on and will probably be the first place he sheds more light on his current situation.