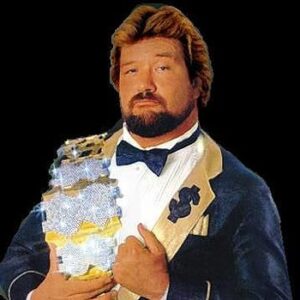 The Road to Wrestlemania 26 is in full swing and that means it’s also time for the Hall of Fame inductees for this year’s class to be revealed each week.

We kick off this year’s class with a man who is no doubt deserving of the honor, the one and only “Million Dollar Man” Ted Dibiase. Ted is one of the guys that has been a lock to go into the Hall of Fame for years now, and it’s only been a matter of when.

Dibiase debuted in WWE in 1987 and stepped right into a memorable angle that would make him an immediate main eventer. Before debuting in WWE, Dibiase was a top face in Bill Watts’ UWF promotion, but in the tradition of the good old days, the transformation to the “Million Dollar Man” was explained in the mid-south area as an inheritance from one of Ted’s rich relatives.

Upon entering, Ted claimed he was going to buy the WWF Heavyweight Championship from Hulk Hogan which of course Hulk turned down, but these events lead to the infamous end of Hogan’s 4-year reign as champion when he lost to Ted’s hired gun, Andre the Giant, in controversial fashion.

Andre then handed the belt over to Dibiase, and Ted reigned as the WWF Champion for a few days and even appeared at house shows with the belt, before being stripped and the title being held up for the Wrestlemania 4 tournament.

Ted had a good long run with WWE, having memorable feuds with Randy Savage, Jake Roberts, Dusty Rhodes, and his own bodyguard Virgil. Ted also formed a successful Tag Team Championship team with I.R.S. as Money Inc. Now Dibiase still makes appearances for WWE, including being one of the best guests hosts of RAW that we’ve seen. Dibiase has 3 sons in wrestling, including Ted Jr. of course, Bret in FCW, and Mike on the independent scene, and we’ll probably see at least Ted Jr. inducting his dad into the Hall of Fame.

So we’ve got our first inductee, and with rumors abound on others, it will be interesting over the next few weeks to see who will comprise the 2010 class of the WWE Hall of Fame.