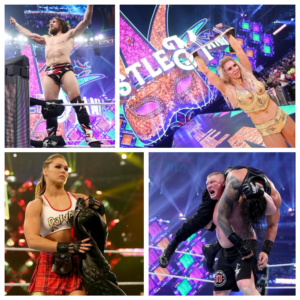 WWE’s biggest event of the year has come and gone and the Internet is still buzzing over various aspects of WrestleMania 34.  This year, rather than post the results which are literally on thousands of websites, we felt like a review of the event and our feelings on some of the biggest happenings would be more fitting.

One of our biggest pet peeves every year is when the plans for WrestleMania leak online and just about everything is known months in advance. This year seemed to be no different as most of the card and even the (assumed) results seemed to be everywhere months ago.  But this year WWE threw numerous swerves at us which made us like this WrestleMania even more!

Of course, there are those that absolutely hate some of the results from the show, but as usual, wrestling (especially WWE) can’t please everyone. Going in, we felt like it was a given that A. Roman Reigns was 100% leaving this show as Universal Champion and B. Asuka’s streak would remain intact, probably for another year as speculated on numerous other sites.  The results of those two matches especially blew us away as both Asuka and Roman Reigns were defeated at WrestleMania 34. In Asuka’s case, it ended her 900+ day undefeated streak that began in NXT. While the loss might bring her down a notch as far as being looked at as the elite star of the women’s division, it may help her avoid a Goldberg situation where the first loss can set off a downward spiral.

For Roman Reigns, the shocking loss to Lesnar seems to verify the fact that he can’t beat Lesnar and needs to move on to something else.  While Reigns has main evented 4 WrestleManias in a row, he’s still being booed and even though WWE tried to make him look like a hero against the part-timer Lesnar, another loss really signals yet again that a big change is needed.

Aside from those two shocking match results, WrestleMania 34 delivered the return of Daniel Bryan which was a needed feel-good moment, the WWE in-ring debut of Ronda Rousey who showed she is a wrestling megastar in the making, and a much-needed heel turn for Shinsuke Nakamura who lost to AJ Styles in what we would consider a mild upset as well.

One of the most debated moments of the night was Braun Strowman’s choice of tag team partner for his match against “The Bar.” Leading up to the match, rumors of names like Hulk Hogan, Rey Mysterio, Elias, Big Show, and others were circulating, but in the end, Braun chose a child out of the crowd to be his partner. We felt this was very odd and an experimental type of move – something you would see on any show BUT WrestleMania. Braun and “Nicholas” went on to win the tag titles while the Internet went to war either for or against the move, with some just moving on to making memes about the whole situation.

We chose the term “roller coaster ride” for this post because it felt like this show flowed really well, giving us a basic/good match without anything over the top followed by one of the bigger matches that featured something you couldn’t see on a typical RAW or Smackdown Live.  While people are complaining about Lesnar keeping the title, we feel WWE has created an “I have to see what happens next” vibe which is always a good thing. While having the show end on a positive note with the fans actually happy, it was nice to see it end with a shocker just when everyone thought they had it all figured out.