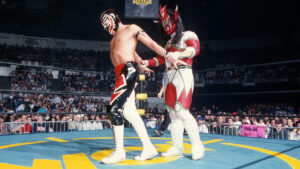 When thinking back to December of 1996 in WCW, almost every thought revolved around the nWo or the fact that Roddy Piper had arrived in the company. Piper vs. Hollywood Hogan headlining a PPV in 1996 (regardless of anyone’s opinion on their ages) was still a big deal. WCW was red hot interest-wise, but there really was a lot more going on in the company, and one of those things was the emergence of their Cruiserweight Division.

For tape traders who had seen events like the “Super J Cup” and newsletter readers, WCW suddenly became the place to see all of these International cruiserweight stars come together. Rey Mysterio had led the way, bringing a new style that hadn’t really been seen before. Jushin “Thunder” Liger on the other hand had been a WCW semi-regular for around 5 years in WCW. The two meeting in the ring seemed like a true dream match, and it actually happened at Starrcade 96.

One of the real shocks in researching this match was that this is the ONLY Rey Mysterio vs. Jushin Liger match that ever took place, and they only met one other time in a multi-man match. To think that these two legends were both innovators in the junior-heavyweight class and could have been top draws in numerous countries. I remember watching this match live and even then expecting it to be a 90 mph high spot fest similar to many of the Lucha matches WCW often featured. Today it’s become the norm for high flyers to dive right in and do a lot of spectacular moves without meaning; this match is very different, with Liger having the rare occasion to have the size advantage here, and manhandling Mysterio in the early parts of the match.

This match shows how even a cruiserweight match can still come across as a fight with competitors trying to win and making big moves meaningful. I don’t think I appreciated this match as much back then because of the slower pace in comparison to other cruiserweight matches at the time. This one also may have been overshadowed by everything else going on in WCW at the time as it’s rarely mentioned.

What an awesome clash of styles the likes of which isn’t often seen today in wrestling. Here is Jushin “Thunder” Liger vs. Rey Mysterio from Starrcade 96: