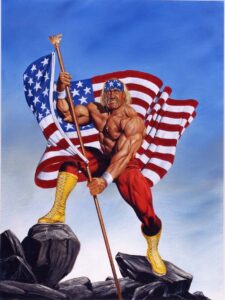 So, every year, a couple of months before Wrestlemania comes, I sit down and watch all of em. This year is a little different. Because this year, Wrestlemania is coming to my home town for the first time. And of course, I will be there. So there is a little more meaning into my viewings this time around, so I thought I would share my thoughts on them. I am currently watching Wrestlemania XI. So I figured I would write about the first 10. Then write about each one individually here on out…

Wrestlemania
The one that started it all, so many classic moments. Of course, my favorite match out of this one is the main event. Hogan and Mr. T vs Piper and Mr. Wonderful.

Wrestlemania 2
Probably my least favorite Mania out of them all. No real magic in any of these matches. But Hogan vs Bundy was pretty great for it. Susan Saint James was really damn annoying and the multi-city thing just threw me off.

Wrestlemania 3
The Wrestlemania that made Wrestlemania what it is today. It’s pretty hard to pick a favorite out of this, Hogan and Andre is a classic, but Savage and Steamboat is right up there.

Wrestlemania 4
The tournament. The 10-mile long entrance ramp. And my favorite moment being, when Gorilla Monsoon was talking about “The Little Dragon” who will soon be tearing up the WWE.

Wrestlemania 5
The Mega Powers……….EXPLODE!! Yeah, the best thing about this was Hogan vs Savage of course.

Wrestlemania 6
Hogan vs Warrior. Good lord. Most epic match I had ever seen in my life. Face vs Face. And Hogan losing, good grief.

Wrestlemania 7
This was actually the first Wrestlemania I had ever watched. I was a casual fan before this, but it was around 1991 when I became a hardcore wrestling fan. Undertaker\s streak began here. And we all know what match from this one is the best. Savage vs Warrior. Career match. And the lady in the rain hat crying.

Wrestlemania 8
Back then, my parents had the giant satellite dish in the yard. So we got live event PPVs for free because we could just watch the feed coming from the event itself. This one pissed me off, because the sound was out for most of the event, and I could only hear a few things. One being Piper’s awesome promo with Bret in the back before their match. Which is my favorite match from this Mania. Warriors run-in at the end didn’t quite have as big of an impact on me as it should, since I had no sound.

Wrestlemania 9
Holy crap. Weirdest Wrestlemania of them all. Not really any great matches from this one. And while most people went crazy for it, the whole, Hogan winning the belt at the end just confused the hell outta me.

Wrestlemania 10
Bret and Yoko rematch. Which was pretty good, but Bret vs Owen stole the show. This one just felt weird to me because I was so used to the huge boxes that WWF released their VHS tapes with, and this was the first one I got that came in just the normal VHS case. Strange to me.

So there ya go, my brief thoughts on Wrestlemania 1 – 10.