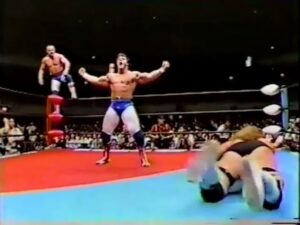 We’ve been running across many classic and/or rare matches lately, and this one was too good not to share. The year was 1989, wrestling stars could work around the world, and without the Internet, magazines were the only window to what was going on in other parts of the country. All Japan Pro Wrestling was a haven for foreign wrestlers who could hang with the promotion’s hard-hitting style.

The participants of the below match reads like a dream match from a wrestling video game – The British Bulldogs (Davey Boy Smith & The Dynamite Kid) vs. Stan Hansen & Terry Gordy – only, this match actually happened. The Bulldogs were only a few months removed from their years-long WWF run. Davey Boy would return two years later, but Dynamite Kid would never return to the company. Stan Hansen was already established as probably the most famous American wrestler in Japan, and Terry Gordy wasn’t too far behind him.

This match really came off to me as a clinic in tag team wrestling. The Bulldogs seemed to work as underdogs in the WWF as where in All Japan they could hit hard and meet monster big men like Hansen and Gordy head-on. This match feels like all four guys are fighting for a win because money is on the line – no choreographed dances here. If you were a fan during this era, it’s kind of crazy to think that Terry Gordy was also wrestling for the NWA at the time, with this match taking place just over a month before the legendary Great American Bash 89 event that Gordy took part in.

It seemed like the decade of the 80s and 90s were filled with unique matches taking place in Japan that not many fans were aware took place. This tag match below definitely stands out as one of them, let us know in the comments if you want to see more like it!