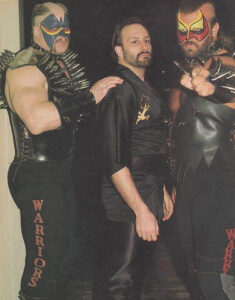 20 years ago in October of 1988, the legendary Road Warriors had just turned heel in the NWA and had revitalized themselves as badasses after realizing they’d become soft by hanging around rookie nice guys like Sting. They decided in a 6 man tag against the Varsity Club that they’d not tag Sting in the whole match, and when Sting took it upon himself to jump in and get involved, the Warriors kicked his ass and gave him a doomsday device to make the turn official.

At the time, in the great days of kayfabe and no Internet, I had no clue this was coming, I just remember watching the NWA show and hearing the announcers talk about a horrible incident that had gone down and they would have footage. The Road Warriors had been at the top of my list of favorite wrestlers for years and I was in complete shock when I saw what they did, for the first time I HATED them for what they did; how could they turn their back on the good guys after all these years…God wrestling was good back then. There was even a great magazine cover from back then that said something like “Sting, Dusty, and the fans can GO TO HELL.” VERY Strong stuff at the time, and I really felt the impact on stuff like this as a kid.

Things got worse on October 29, 1988 when the Road Warriors got a team title shot against the Midnight Express at a house show in New Orleans. Yes, back then, random house shows could feature big events and title changes. Well, things got started fast and the Warriors jumped Bobby Eaton in true heel fashion and busted him open early, pretty much taking him out of the match completely. Stan Lane fought hard but the Midnights were pretty much destroyed by the new heel road warriors and before long, the Legion of Doom were finally the NWA tag team champions after 3 years of being unable to win the belts.

This made me hate them even more, these tactics, the cheating, the brutality. In reality, it was what was needed at the time so the Warriors could keep their edge, but it also was the reason the heel turn didn’t work because the Road Warriors’ ass-kicking ways were still being cheered!

In only a few months, the Warriors were turned face again after a brief feud with Dusty Rhodes that lead to a tag title match at Starrcade 88 against Rhodes and Sting. The Warriors title win does bring me back to a time in wrestling when you could turn on NWA Wrestling at 6:05 on TBS and be shocked when the announcers informed you that an incident had gone down and you couldn’t wait to see when they showed the footage of what went down. This was still a great period of wrestling and still a glory period for the Road Warriors, as they were still one of the most awesome acts in wrestling to see.