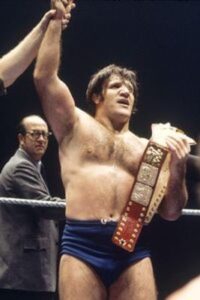 If there is 1 person above all others that should be in the WWE Hall of Fame but isn’t yet, it’s “The Living Legend” Bruno Sammartino.  There are plenty of names out there that should be in The Hall  but aren’t yet, but Bruno is THE guy since he was really the top guy in WWE longer than anyone else.  Bruno has been at odds with WWE for years now over the general direction Vince McMahon has taken the industry etc. and has always refused any invitation from WWE to be inducted into the Hall of Fame.  Word has it that Triple H is the person that is responsible for finally getting Bruno to agree to be inducted after months of meetings to work out a deal.  Today WWE.com issued a press release stating that Bruno Sammartino will finally be inducted into the WWE Hall of Fame this year at Madison Square Garden.

With all the recent talk about CM Punk’s historic WWE Title reign this past year, the man whose record will most likely never be touched is Bruno Sammartino.  Bruno is the longest-reigning champion in WWE history; defeating Buddy Rogers in 1963 and holding the (then WWWF) belt for almost 8 years!  Bruno is also the first-ever 2-time WWE Champion as he regained the title in 1973.  Champion or not, Bruno was the top draw in WWE for nearly 20 years and has always been regarded as one of the guys that HAS to be in the WWE Hall of Fame if it is to be considered legit.

Bruno joins another long-term WWE Champion in Bob Backlund in this year’s Hall of Fame class, along with Mick Foley and Trish Stratus to comprise what is so far one of the best classes in years.  The Hall of Fame takes place at Madison Square Garden on April 6, 2013.  The night before WrestleMania 29 will be very historic, and the induction of Bruno Sammartino will be a can’t miss moment for true fans of pro wrestling.  Here is a great video from WWE on Bruno’s wrestling career: