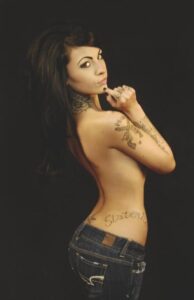 Earlier this year, WWE Champion Seth Rollins was involved in the middle of a controversial situation that exposed him in more ways than one; his Twitter account was hacked, and nude pics of NXT Diva Zahra Schreiber appeared on the account – the problem was that Rollins was engaged and apparently these pics revealed the fact that Rollins was seeing Schreiber on the side – nude pics of Rollins soon popped up on the Internet as well after this situation came to light.

The whole thing blew over pretty fast, and Rollins of course went on to win the WWE Championship at WrestleMania, and even Schreiber was kept on as an NXT talent…and she was suddenly seen in public with Rollins as his girlfriend (guess that previous engagement went down the tubes quick.)  Zahra did some ring announcing work and even debuted as a talent in the past couple of weeks as she debuted as the “sister” of Solomon Crowe.

WELL, all of that’s out the window now since Schreiber has once again stirred up controversy as TMZ reports that some wrestling fans who dig up all the history they can find on every wrestling personality ever found some artwork posted by Schreiber from a few years ago that featured swastikas.  Schreiber attempted to claim it was all about art or history……but this is 2015 WWE here, and we know how they handle such things.

WWE has released Zahra without hesitation due to her remarks about the artwork, and just like that she’s gone from WWE……Seth Rollins’ girlfriend or not.  While this of course has people talking, we’re would not be surprised to see Zahra Schreiber back in WWE at some point since Rollins is obviously gaining pull in the organization and will probably use it to bring her back…if he remains in a relationship with her that is.