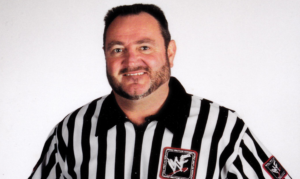 A sad case of circumstance today as just days after reporting the passing of former referee Dave Hebner, another one of the most recognizable referees ever in Tim White has also passed away.

The current outpouring of love for Tim White today, even from current talent who interacted with him as he was still working at many of the live appearances and signing events for WWE, shows he was one of the most liked people in the business.

It’s been well-documented that Tim White was also the traveling partner for Andre the Giant, which has provided many stories about Andre’s life over the years. Tim wasn’t even a full-time referee until Andre’s passing in 1993.

Time was a highly recognizable face through the 90s, refereeing some of the biggest matches in company history at the time, including the infamous Hell in a Cell match between The Undertaker and Mankind. Tim White’s refereeing career was coincidentally also cut short in a Hell in Cell match when he injured his shoulder in the Triple H vs. Chris Jericho match in 2002. Tim refereed his final match at WrestleMania 20 where he was injured again and forced to retire.

Even outside the ring, Tim White felt like a lifelong employee in WWE, appearing in skits and working various jobs throughout the years. Tim’s bar “The Friendly Tap” in Rhode Island was even destroyed in numerous WWE angles over the years.

R.I.P. Tim White, forever known as one of the real “good guys” in pro wrestling.