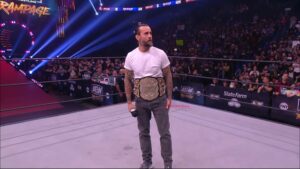 In shocking news announced earlier tonight on AEW Rampage, CM Punk has suffered an injury that will require surgery and has relinquished the AEW Championship just 5 days after winning the title.

Punk wrestled on this past Wednesday’s Dynamite and was apparently injured in that match, as he was seen later limping during the untelevised portion of the MJF segment. Earlier today, Punk announced he would be appearing on Rampage with an announcement about the AEW Championship and his career, and now we know that he will be out of action.

The timing really hurts here since Hiroshi Tanahashi was announced Wednesday as Punk’s opponent for the huge Forbidden Door event, and the first time meeting of the two was a marquee match for such a global event. An emotional Punk promised that this wasn’t the end, but he wasn’t going to stand in the way of another top star being champion in his absence.

So now we wait and see how a new AEW Champion will be crowned. Will we see yet another tournament? Possibly a multi-man match? Or will AEW go even bigger with Forbidden Door and open the possibility for someone from New Japan Pro Wrestling to become champion.

**UPDATE** AEW has announced that a battle royal will be held on Dynamite with the winner facing number one contender Jon Moxley later that night. The winner of the match will go on to Forbidden Door to face Tanahashi (presumably, they had a hard time fully explaining all this) in an Interim World Title match. This is good news for all involved as Punk will remain champion but we will still get to see World Title action in his absence.