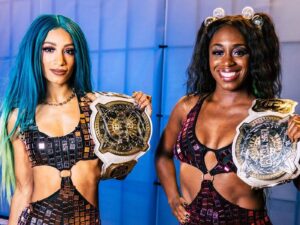 Monday night there was a situation during the live Monday Night RAW the likes of which has rarely occurred in WWE. Sasha Banks and Naomi walked out on the show even though they were to participate in the show’s main event. The buzz hasn’t seemed to settle all week, and we knew repercussions would be on the way.

Earlier tonight on SmackDown, Michael Cole acted as spokesperson for the company as he announced that Banks and Naomi had been suspended indefinitely, and a tournament would be held to crown new champions. Cole’s words were obviously coming from Vince McMahon, as he was sure to play up how the duo disappointed not only millions of fans but also their fellow Superstars.

We knew the incident would come with some form of punishment, but it’s been up in the air as far as how severe it could be. The suspension sounds like at least a first step while WWE decides if they will bring back “Boss ‘N Glow” at all, or if either side is even interested in that.

Throughout the week there has been news of both Sasha Banks and Naomi negotiating new contracts before the incident this past Monday, so it seems like both being gone could definitely be one direction this takes. If either one of them is brought back at some point, they would undoubtedly have to “prove themselves’ and start back at the bottom.

Here is WWE’s statement on Sasha Banks and Namoi’s suspension via Michael Cole on SmackDown: