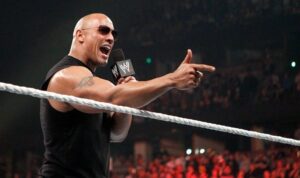 Tonight is a night of celebration as WWE finally gave us something that has wrestling fans buzzing more than they have in YEARS. Tonight, it was revealed that none other than The Rock would be the guest host of WrestleMania 27. The speculation was there all week, but the delivery is what really popped the wrestling world. When Vince McMahon stated last week that the guest host would be revealed, I figured we would just be getting an announcement. Low and behold, we got the announcement in the form of the Rock coming down the aisle and appearing live on RAW for the first time in years to a massive reaction.

What followed was a classic Rock promo that went about 20 minutes long, and we couldn’t have asked for more. The Rock promised he would never go away (not sure what that really means since it seems like he is just coming in for this one big-time hosting spot,) then took things in a totally different direction, talking about confronting John Cena at WrestleMania (much to EVERYones delight.)

So while the Rock is pumped to deliver the best WrestleMania in years, we now have a new dynamic with the Rock no doubt getting involved in some physical action as well. Actually the minute The Rock mentioned John Cena, it was obvious that the red hot match everyone wants is The Rock vs. John Cena in one of the last dream matches that could happen. More than likely, I’m betting we will still see Cena vs. Miz, probably with The Rock as the special referee. Hopefully, if that scenario does take place, we will NOT see a lame-ass handshake with Cena and Rock, because after tonight it is VERY apparent that fans want a badass like the Rock, not a pansy like Cena.

The Rock blew everyone else out of the water tonight and really made it evident how huge stars like him and Steve Austin are missed. Thankfully with The Rock back and Austin returning for Tough Enough, Vince’s eyes and ears will be opened by the reaction and buzz The Rock has created.  Kudos to WWE for making the right move and bringing some much-needed buzz to WrestleMania 27.