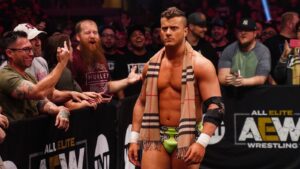 We are less than 24 hours away from AEW Double or Nothing, but now one of the marquee matches could be in jeopardy. Reports from Las Vegas confirmed that MJF no-showed his scheduled meet and greet with fans earlier today, and now Sean Ross Sapp from Fightful.com confirms that a flight out of Vegas was booked for MJF:

I can confirm a flight out of Las Vegas tonight has been booked for MJF.

When the news of the non-appearance by MJF at the meet and greet first broke, many attributed it to Maxwell’s heel character who has been known to never actually be nice to fans at these events. This got much more serious when news of the flight out of Vegas surfaced, but there is still no official word on what’s going on.

MJF is slated to face Wardlow at Double or Nothing which is the payoff to months worth of build. MJF has openly stated that when his contract is up, he would “go where the money is,” and it’s been well known that WWE will undoubtedly be an option for him. Still, his contract reportedly runs until 2024, so it seems he’s been seeking some sort of new or renewed deal way before then.

It should be interesting to see how Tony Khan handles this situation in the next few hours and if he will take a transparent approach when it comes to letting the fans know if MJF vs. Wardlow is happening on the PPV.

Of course, there is a chance all of this could be MJF playing up his role to the fullest, with some even making Andy Kaufman comparisons. Either way, this will be a big story to watch as we head into one of AEW’s biggest shows.