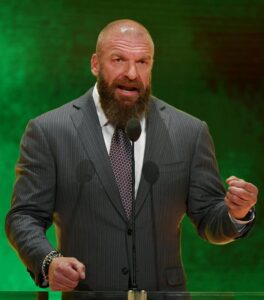 For months now, Triple H has been MIA from WWE TV and behind-the-scenes with his status unknown following what was described as a “cardiac event” last year. Today Triple H finally spoke out about his health issues and future during an appearance on ESPN’s “Stephen A’s World.”

Triple H was understandably choked up during his ESPN interview as he described his health scare and how it all came about. It turns out that he had a viral pneumonia that escalated quickly and sent him into heart failure. Thankfully, things ended well and “The Game” appears to be in better shape now. This lead to the next question, which was about his in-ring future.

At that point Triple H was quick to announce that he is retired and will never wrestle again, due mostly to now having a defibrillator in his chest. Obviously, this is the right move without question, and it has given the wrestling world a reason to celebrate Triple H’s career. From the snob in the “New Generation” to forming DX, becoming The Game, and becoming one of the most dominant world champions ever, Triple H had an in-ring career that was incomparable, and his behind-the-scenes presence will surely continue on for years to come.

The outpouring of respect for Triple H will undoubtedly continue throughout WrestleMania week, but there will definitely be more questions about when and where Triple H’s full-time behind-the-scenes return will be since he has been greatly missed.

Below is Triple H’s ESPN interview discussing his health and retirement: