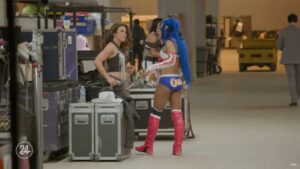 This past year’s Royal Rumble gave us a number of memorable events, especially with the Women’s Rumble since the company brought back a number of legends for the match. Maybe the most surprising of all was Mickie James, not because she wasn’t deserving, but because she was the current Knockouts Champion for Impact Wrestling.

Usually, in situations like this, WWE likely would have ignored any other company or championship and just had Mickie come out with her classic WWE theme music and look, but that wasn’t the case. When Mickie’s number came up and “Hardcore Country” hit, the crowd erupted and it was truly something special to see, especially since Mickie wore her Impact Knockouts Title to the ring.

Having a name like Mickie James come back for one night only, be able to wear her title from the outside company she’s signed with, and use her Impact theme music was one of the most memorable moments of the night, but one has to wonder what was going on backstage. Mickie returning and representing another company, mingling with ladies she has a history with from various eras in WWE and elsewhere – luckily in this era, there’s always a camera present.