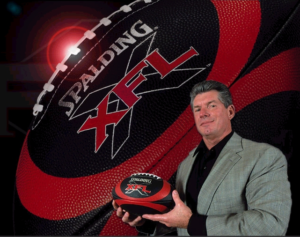 No you didn’t read that headline wrong, Vince McMahon is officially bringing back his XFL football league 17 years after it’s one and only season. While the XFL has been looked at as a joke/failure ever since it ceased operations, but no one can deny that the excellent ESPN documentary on the league that aired last year generated a lot of interest and nostalgia. At the end of that documentary, Vince (seemingly) joked with Dick Ebersol about “doing it one more time” when it came to the XFL; today we learned it was no joke at all.

Rumors began to spread about an XFL comeback when Vince McMahon formed a new company known as “Alpha Entertainment” and that the company would be football-related.  While many thought it may have had something to do with archived XFL footage or maybe even merchandising, McMahon held a press conference earlier today to announce the official return of the league in the year 2020.

Why the two-year wait? Apparently, Vince wants to make sure everything is lined up and well-prepared so that the 2001 season isn’t repeated.  It makes sense business-wise, and hopefully, a legit alternative to the NFL will be in place this time around. What does this mean for WWE? There is already speculation that the XFL may pull Vince away from WWE to some degree which would likely see Triple H take on even more of a role in running the wrestling side of things, yet Vince told the press that the XFL will not take away from his WWE duties at all.

During the press conference, McMahon revealed that the league would be “listening to what fans want” when it comes to rules and presentation and that they would be starting small with only 8 teams and a simplified playoff system.  While not a lot is known or set in stone at this point, it sounds like Vince is set on making sure the XFL is done right this time.  He mentioned during the conference that there would be no WWE crossover, and would be completely focused on football.

Does the XFL have your interest? What has to be done to make it right this time? It sounds like Vince McMahon is listening and the next 2 years of buildup will be very interesting when it comes to what the “New XFL” will ultimately look like.