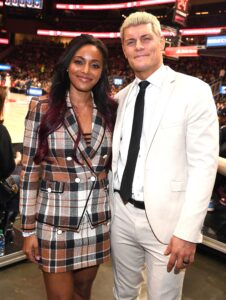 In a story that has the wrestling world buzzing today, Cody Rhodes and his wife Brandi have both parted ways with All Elite Wrestling. This is obviously significant since Cody was not only an E.V.P. for the company but also one of the big names that helped get the company off the ground – Cody vs. Dustin Rhodes really got eyes on the first AEW PPV and made many realize the company was the real deal.

For weeks leading up to this news, it has been reported that Cody was working without an AEW contract and was a free agent; of course, this didn’t seem to mean much since Cody was an E.V.P. and the chance of him leaving seemed minimal. You could have even ventured to say that Cody’s contract would be used in a storyline in some way after how much it had been mentioned. As the weeks went on, it seemed like the possibility of Cody leaving became more realistic, and now both Cody and Brandi are gone.

The move is even more interesting since Cody is a host of the “Go Big Show,” and the Rhodes’ even have their own reality show “Rhodes to the Top” which are both tied to Turner networks. That fact alone leaves the door open for all of this being some sort of angle, but the chances are looking slim as of now.

So the next big question is “What now?” Without a doubt, WWE is right in the middle of this conversation as Cody is a bigger name now than he was when he left the company. There have already been rumblings that WWE had made an offer, and if they did and Cody accepts, it would make him the first big “steal” back to WWE from AEW. It almost feels like Cody had his run in AEW, and the fan reactions have made it feel like they were done with him, but where does he fit in WWE? The much bigger question is, does Brandi fit at all?

The fact is Cody is officially gone from AEW, it’s WrestleMania season in WWE, but with WWE’s track record of handling incoming talents poorly, there is no telling where all of this will end up. With WWE’s recent use of power couples like Edge and Beth Phoenix and The Miz and Maryse, would the Rhodes’ fit in that mix or would Cody step up to WWE main events? One thing is for sure, following this story will be very interesting.